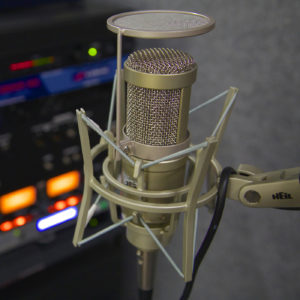 I really want to talk about what you need to get started, so our hope is to appeal to ABSOLUTE beginners.

This episode is about Microphones. There are many different types and we won’t get into the details yet about how each one works.

The basic point is you need to get the electrical impulses that the microphone receives into the computer.

Those impulses are analog signals. We need to change them into digital ones.

Interface. USB is a type of (hardware) interface. The electronics can be contained in the device that plugs into the USB port on your computer.

You then need audio recording software to record and write to a file the audio signals. This is the process of Analog to Digital conversion.

We live in an analog world, but most of our electronics are digital. Again, we won’t go into detail yet about how the process goes from analog to digital (or the other way around going from digital to analog). We just want you to be aware of the basic concept.

So let’s get to the microphones. The ones that you heard at the beginning of this episode are examples of the many types that are available. There are even more out there.

We started at the low end and also the less expensive end. The mic that is built into the iMac was first. No investment in any equipment, but it just doesn’t sound good. Is it prone to pick up everything in the room and in some cases can introduce feedback because you have a microphone and speakers in the same environment. Feedback happens when a loop gets set up. Audio goes into a computer and sound comes out of the speakers and then back into the same microphone and that loop builds upon itself and it eventually screeches or whistles and it just doesn’t sound pleasant.

Most recording software has something called feedback prevention or suppression. However it is best when you use a microphone to wear headphones.

So the Logitech is slightly better, because it has headphones with a built-in microphone. There’s no real way to get the small speakers in the headphones to feedback into the microphone. But, it’s not a great microphone. It is more appropriate for a Skype call, where you minimize feedback, but you don’t need great audio quality – and you didn’t spend to much money.

Next is the Sennheiser Headset microphone. It sounds a good bit better than the Logitech and it has some nice features, but it’s also more expensive.

The next is the Audio Technica ATR2100 USB microphone. This is a hybrid type of microphone. It has a USB interface built-in, but it also has a professional connection type, called XLR, that can be used with an analog mixer setup. More on mixers at a later time.

The rest of the microphones are traditional analog mics with those XLR connections that I just talked about. With these microphones, the Shure SM58, the Audio Technica AT2020, and the Heil PR-40, we need to use what’s known as a USB interface. In our case it’s one from a company called Presonus – it’s the 22VSL USB interface. All of the mics will plug into the Presonus with XLR cables, and then we plug in the Presonus to the USB port on the computer. The computer then recognizes it just as if it were a USB microphone, like the Logitech, the Sennheiser, or the ATR2100.

With any of these microphone setups we use audio recording software such as a program called Audacity, or we can use something like GarageBand.

So we’ll end it there, but I will give you some more details about the microphones on the “show notes” page at podcast.andyrush.net. Look for the episode called Microphones.

Until next time, I’m Andy Rush. So long.